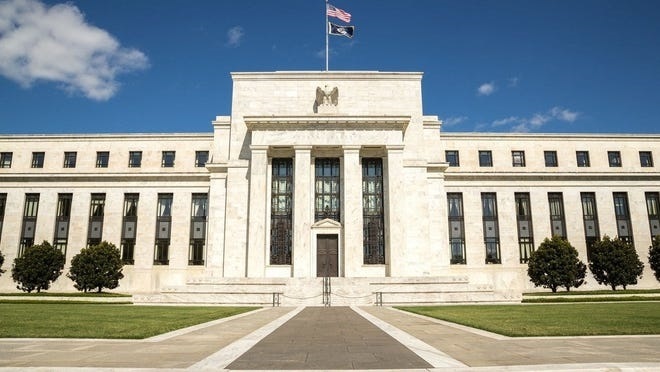 “Earnings don't move the overall market; it's the Federal Reserve Board... focus on the central banks, and focus on the movement of liquidity... most people in the market are looking for earnings and conventional measures. It's liquidity that moves markets.” - Stanley Druckenmiller

The Federal Reserve System, otherwise known as the Fed, is the central bank of the United States. Their objective is to promote maximum employment and keep inflation in check.

The Fed determines the US monetary policy (i.e. how much money is circulating in the markets). One of the most important economic data points they dictate is the federal funds rate.

The federal funds rate, which is set by the Federal Open Market Committee (a division of the Fed), is the rate banks use when they lend to one another. Once the Fed raises rates, this has a domino effect on the banks who will then raise the rates in which they charge consumers.

When economic activity is slowing down, the Fed will typically lower rates to make borrowing cheaper and therefore stimulate economic growth. Also, when rates are near zero, this discourages putting money into a savings account (earns little to no interest) and incentivizes putting money into the markets and for consumers to spend.

Since the Great Recession of ’08-’09, investors have relied on the Fed using unconventional monetary policy to keep markets calm. During this time, they initiated the policy referred to as quantitative easing (QE). QE consists of printing money (now a days it’s mostly electronic and not necessarily printing) and pumping that money into the market by buying treasuries and mortgage-backed securities to stimulate the markets.

QE provides liquidity to the markets and, in times of great volatility, can provide much needed stability. But the question then becomes, ‘how much is too much?’. The Fed’s balance sheet has increased 111% since August 2019 to $7.9 trillion: 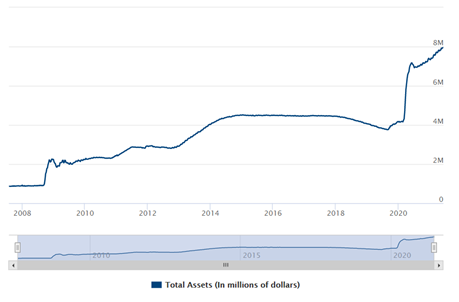 This could come with major consequences. In my opinion, it’s not a healthy market when investors know, in the back of their minds, that the Fed will ultimately bail them out. This leads to unnecessary risk taking and can ultimately bring major volatility to the markets. Never mind the current debt levels.

During the pandemic, the Fed, again, took extraordinary measures to keep the economy from collapsing. This included lowering rates and keeping them near zero, stabilizing the financial markets, and supporting the flow of credit in the economy. Many have praised the quick and swift action of the Fed to avoid a major collapse of the markets.

Some of the ways they stabilized financial markets was by purchasing US Treasury securities. In late March, treasuries were extremely volatile and were difficult to sell. Therefore, the Fed stepped in and started buying these securities (they bought around $1.7 TRILLION from mid-March to end of June 2020).

Even though we are now on the tail end of the pandemic (hopefully) and the economy continues to rebound, the Fed is still buying $120 billion worth of bonds per month. With inflation concerns continuing to make headlines, many believe the Fed is fueling a much bigger problem.

As a result, and to not much of a surprise, the Fed signaled in their meeting on 6/16/21, that they expect to raise interest rates by late 2023. Additionally, they discussed the eventual reduction of the central bank’s massive bond-buying program.

You would think if someone announced they would do something 2 years from now, it wouldn’t matter too much. But the constant debates show that the Federal Reserve has to continue to walk a fine line in their decision to begin tapering and taking the economy off life support.

This should make sense, as the economy rebounds and we get back to a functioning society, we should not need the Fed to continue to provide liquidity. But when investors become so reliant on these policies, once they end, it could undoubtedly cause chaos in the markets.

Another interesting debate that has been spurred as of late is that the Fed may be creating a further divide of the wealth inequality in the US. They have become the safety valve for the markets, and stock ownership is typically skewed toward wealthier Americans. Lower rates do not generate material interest in a savings account. Furthermore, as the Fed has allowed the stock market to reach new highs, this again favors wealthier Americans.

It’ll be an interesting story to see how this plays out.

Yes, learning about the Fed and their policies is not that exciting. But as an investor and consumer, you should always be paying attention because they impact borrowing rates. This will impact the rate you get for your savings account, mortgage rates, student loans, etc.

Disclosure: This material is for general information only and is not intended to provide specific advice or recommendations for any individual.